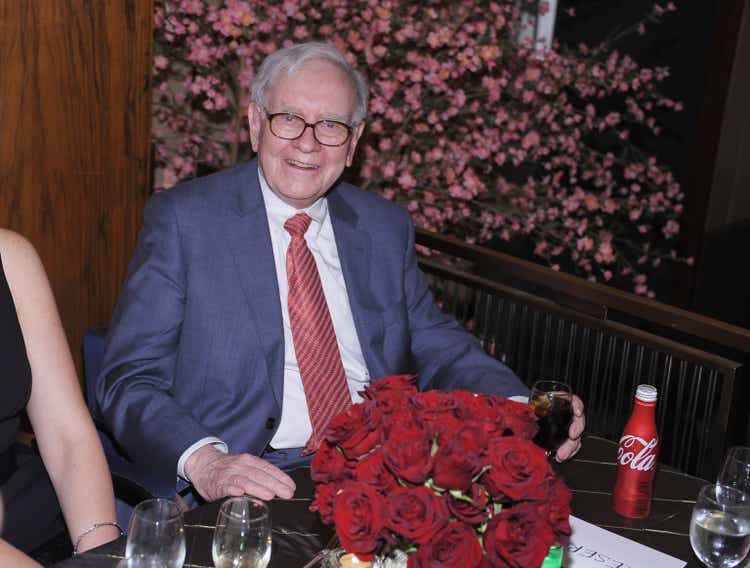 Warren Buffett loves to publicly praise the standouts among Berkshire’s wholly owned subsidiaries such as GEICO or See’s Candy. However, out of all of BRK.A’s investments, his late 80’s investment in NYSE:KO is the one he probably talks about the most. It exemplifies everything he looks for in an investment and he practiced what he preached: Wide moat, bought when others were fearful, will probably never be sold (his ideal holding period). There’s an hour and a half long video compilation of everything Buffett and Munger have said about KO publicly. One of Buffett’s top disciples, fund manager Mohnish Pabrai, dedicated over an hour talk examining BRK.A’s KO investment. For decades it has probably been BRK.A’s most exemplary investment.

While there’s no doubt it has been BRK’s most prolific stock pick, the important questions right now are (A) what is the potential of future growth for this very mature company, and (B) is the share price an attractive one? Shares rose slightly on recent earnings, so how does it look at the current price?

I will cover valuation toward the end, but the Q1 numbers were definitely positive. Despite revenue lost from leaving the Russian market as well as China’s consumption declining in the short term due to current lockdowns, KO appears strong. Several metrics reached all-time highs, including: share price, operating income, net income, and EPS.

The global TAM for non-alcoholic beverages is estimated at 833.1 billion and anticipated to grow at a compounded rate of 5.6% till 2030. KO will obviously take part in much of this growth. Recent attention has been given to increasing RTD coffee/tea and energy drinks. The biggest potential sector that KO has no exposure to currently is alcoholic drinks, something the CEO hasn’t ruled out but also hasn’t made official plans for. I wouldn’t expect this anytime soon, but it’s far more likely that they will diversify into alcohol eventually rather than food.

One bigger focus is on Coca-Cola Zero Sugar, which contributed five percentage points of growth to sparkling single-serve mix. Consumer demand for no/low sugar drinks will keep increasing, particularly in developed nations. The growth of sugar-free beverages within just the sparkling category alone is expected to grow at a CAGR of 7.3% till 2030, reaching around 243 billion.

Dividend growth investors have been drawn to KO for a long time due to its impressive dividend growth record of 59 years. Even for the investor looking to only live off the dividends as income, KO shouldn’t be seen as a bond proxy, or as a great dividend at any price though. The price of the shares when buying matters, and the underlying growth and returns on capital of the business matters too. Below are some metrics to show the earning power of KO and its competitors.

Everyone knows that consumers in the developed markets are shifting away from sugary drinks. The only reason KO will be able to adapt and make that shift too is because of the financial strength they have and always had. Free cash flow has compounded at a rate of 9.2% over the past 32 years. With such stable and growing FCF, KO can continue strong shareholder yield as well as acquire or invest in younger brands such as their partnership and roughly 16% stake in MNST.

KO will be forced to adapt to whatever consumer preferences are en masse. The declining revenue over the past decade is also mistaken for a shrinking business when in fact unit volumes are up. Revenue has grown again from bottoming in 2018. The currency differences skew the picture since around 80% of KO’s revenue is international but reflected in US dollars as far as stating top line on the income statement.

While I’m not wildly bullish on long term growth, the power of this brand must not be underestimated. In fact, I view brand power as being your margin of safety if you’re considering buying currently.

I don’t recall Buffett using the term “shareholder yield” that much, but if you look at most of his biggest stock positions, the combination of dividends and buybacks have been crucial to the returns. He loves dividends to add to the war chest, because it is like a royalty on the goods from businesses he thinks have wide moats and the buybacks will be part of driving EPS growth over the long run.

The way to look at KO is the shareholder yield being a version of royalties on units sold. They still make acquisitions and investments in younger companies as mentioned, and your royalties will slowly grow. The following shows how much KO spends on dividends and buybacks measured in billions:

The company announced that repurchases will resume with 500 million expected to be spent this year.

Below is a relative valuation table followed by DCF:

The price is high now as far as getting a combination of current dividend yield plus future growth. Both are stunted by paying a premium, so I would look for better spots to capture a higher yield and then hold on. KO is a blue-chip company that pays out most of what it earns, so you shouldn’t settle for the implied quality of a blue chip yet receive a dividend yield that currently is around the same as the 10-year. You know that KO will never be a growth machine again, and you should be compensated for that fact by a steadily increasing dividend at an above average yield.

I should note that KO has excellent net margins right now at around 25%, and it’s likely the market is placing a premium as a result.

Buffett made an iconic investment in KO in the late 80’s, but his success doesn’t at all guarantee you will have a similar experience if you invest today. The only way to outperform with KO is to buy at a discount, hold and reinvest all dividends. Right now is not one of those times, but don’t let the below market beta fool you, there will be chances to get in at lower prices.