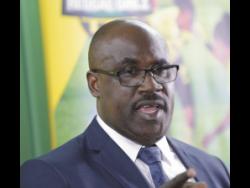 With the Jamaica Football Federation (JFF) struggling for sponsorship of its World Cup qualifying campaign, marketing specialist Sophia Harris is answering the call once again to help gain the necessary financial support.

Harris, who served as the JFF’s director of marketing and business operations from 2017 to 2020, says that she is finalising an agreement to guide the federation’s sponsorship efforts, but this time as a consultant through her firm Lau Global Consulting, of which she is founder and CEO.

JFF General Secretary Dalton Wint reportedly stated that the federation is once again without a marketing manager, as he outlined the need for additional partners with spending for the qualifiers already exceeding $100 million.

Harris said that Wint had reached out to her last week regarding providing assistance in that capacity as another search for a marketing manager continues.

“It feels as though they haven’t found the right fit (for the position) and they haven’t been able to build upon what was there as of January 2020,” Harris told The Gleaner. “However, it seems though we are at the critical hour, the games have begun and, when they asked me to come on board, there were only two sponsors at the time. I am doing it primarily for the players and for the national football programme and for brand Jamaica, to which I am extremely passionate and dedicated.”

Harris says that she has maintained a good relationship with the federation since her departure and has previously offered pro bono assistance.

As she returns to lend support in a different capacity, she says that her immediate plans involve not only signing the additional partners needed but to improve the team engagement with nine games remaining.

Harris says that the difference in the digital engagement and proposal approach since 2020 has not gone unnoticed by other potential partners who have complained about the drop in standard. However, she says that, despite the difficulties, the brand is still viable to attract corporate sponsorship.

“What differentiates us is that the Reggae Boyz are brand Jamaica. They are sports ambassadors for the nation and the Reggae Boyz is one of the most viable potentially profitable football brands in Concacaf. There is great potential for the national football programme to raise funds. The problem is the proposals, and how it was positioned was not communicated in a way that was convincing to sponsors in a timely manner,” Harris said.

“So I do understand it is a tremendous undertaking that I have agreed to assist at this 11th hour but I remain hopeful because the value is there. So, once it is positioned properly, hopefully we are able to sign a few more at this late stage to come on board because the benefits are gargantuan.”

Sports marketing expert Carole Beckford says that the challenge will be for the JFF’s administration to show that they can be trusted with the financial commitment.

“We support winners and I think it’s automatic people will follow (if we win). Administratively, we just need to galvanise support and develop that trust factor. Concacaf is still that zone that attracts the greatest amount of attention because it is the Americas and it is the marketing capital of the globe. And we are not doing anything to capitalise on that.”