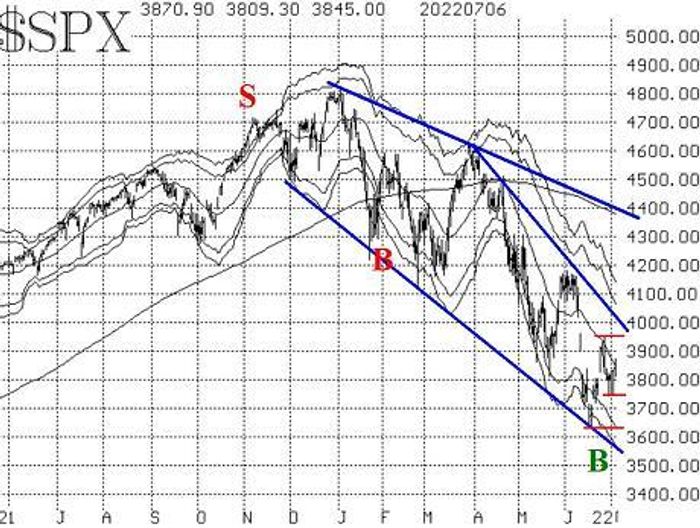 The S&P 500 index continues to exhibit the traits of a bear market, even ignoring the usual positive seasonality around the Fourth of July holiday. The accompanying graph shows that the index’s downtrend lines – lower highs and lower lows – remain in effect, and that is all you need to determine that a bear market is in place.

There is short-term support for the S&P
SPX,

near the 3740 area, which was where three recent days saw a temporary low. Below that, of course, there is support at the year-to-date low of 3630. To find support below there, one has to look at a longer-term chart. There should be further support near 3500 and then 3200.

The peak of the last failed oversold rally at 3940 should provide resistance, as should the 4070-4170 trading range of early June.

The McMillan Volatility Band (MVB) is still in effect, although that can be a longer-term signal. Its target is the +4σ “modified Bollinger Band” (mBB), which is currently at about 4150 and declining. Thus, that Band is already below the early June highs, meaning that the potential for this MVB buy signal has been reduced dramatically in just the short time that it has been in place.

Equity-only put-call ratios continue to remain on sell signals. On both of the accompanying put-call ratio charts, there is a horizontal red line at the early June lows. These ratios would need to fall below that line to return to a bullish status.

Market breadth has been one of the stronger indicators of late, although it has hardly been rousingly bullish.

For the record, at the moment both breadth oscillators are once again on buy signals. That is a tentative state that could reverse quickly with just one or two days of negative breadth. NYSE breadth has been much stronger than “stocks only” breadth, due to the bullishness exhibited recently by interest rate related vehicles, of which there are many on the NYSE.

New 52-week highs, though, continue to be mired in a lengthy slump. There have not been more than 14 new highs on the NYSE on any day for the last 18 trading days, which is a long time for this measure. As a result, this indicator remains bearish, albeit oversold.

has been meandering more or less sideways for about two weeks. That means that the “spike peak” buy signals (green “B’s” on the VIX chart) are still in place. Countering that, the trend of VIX – which is an intermediate-term indicator for stocks – continues to be upward, and that is bearish for stocks. That trend would be broken if VIX were to close below its rising 200-day moving average, which is currently near 24.

The construct of volatility derivatives is still modestly bullish for stocks. That is, the term structure of the VIX futures slopes upward out through October and then drops off. The VIX futures are trading at small premiums to VIX.

Again, this is hardly a rousingly bullish indicator, but at least it is not bearish. It would turn bearish if the term structure were to invert and slope downward.

In summary, we continue to maintain a “core” bearish position because of the downtrend in SPX and the uptrend in VIX. Around that, we will trade confirmed buy signals from our other indicators.

option volume increased sharply in response to Friday’s (after the close of trading) Bloomberg news report that Toronto-Dominion Bank
TD,

was considering making a bid for COWN. Stock volume patterns are strongly positive and improving rapidly. There is support at 27. Option volume was heavy in the Aug 35s and 40s, despite the stock pulling back on July 6.

If bought, we will hold without a stop initially while the rumors play out.

There is a repeat recommendation from last week, since the condition was not fulfilled (that is, NWSA
NWSA,

IF NWSA closes above 16,

If bought, we will hold these calls as long as the put-call ratio buy signal is in effect.

All stops are mental closing stops unless otherwise noted.

We are going to implement a “standard” rolling procedure for our SPY spreads: in any vertical bull or bear spread, if the underlying hits the short strike, then roll the entire spread. That would be roll up in the case of a call bull spread, or roll down in the case of a bear put spread. Stay in the same expiration, and keep the distance between the strikes the same unless otherwise instructed.

Long 2 SPY July (15th) 366 puts and short 2 SPY July (15th) 346 puts: We originally bought this spread in line with the sell signal from the trend of VIX. It was rolled down twice. We will stop this position out if VIX falls below its 200-day moving average, which is currently just below 24.

Long 1 SPY July (22nd) 367 call and short 1 SPY July (22nd) 382 call: This spread was bought in line with the most recent VIX “spike peak” buy signal of June 15. This signal would be stopped out if VIX returns to spiking mode. That is, if $VIX closes at least 3.00 points higher over any one-, two- or three-day period, then exit this spread.

Since VIX closed at 26.73 on July 6, the stop for today would be a VIX close above 29.73. The stop can move each day. If you are stopped out, then re-enter a long bull spread position when the next “spike peak” buy signal occurs.

Long 1 SPY Aug (19th) 378 call and short 1 SPY Aug (19th) 398 call: This spread was bought in line with the McMillan Volatility Band (MVB) buy signal. Its target is for SPX to touch the +4σ Band. The signal would be stopped out if SPX were to close below the -4σ Band.

Long 0 SPY July (22nd) 390 call and short 0 SPY July (22nd) 405 call: This position was bought because of the breadth oscillator buy signals that occurred on June 24. It was stopped out on June 30, when NYSE breadth dipped just below –700 for the day.

Lawrence G. McMillan is president of McMillan Analysis, a registered investment and commodity trading adviser. McMillan may hold positions in securities recommended in this report, both personally and in client accounts. He is an experienced trader and money manager and is the author of the bestselling book “Options as a Strategic Investment“.

Disclaimer: ©McMillan Analysis Corporation is registered with the SEC as an investment adviser and with the CFTC as a commodity trading adviser. The information in this newsletter has been carefully compiled from sources believed to be reliable, but accuracy and completeness are not guaranteed. The officers or directors of McMillan Analysis Corporation, or accounts managed by such persons may have positions in the securities recommended in the advisory.