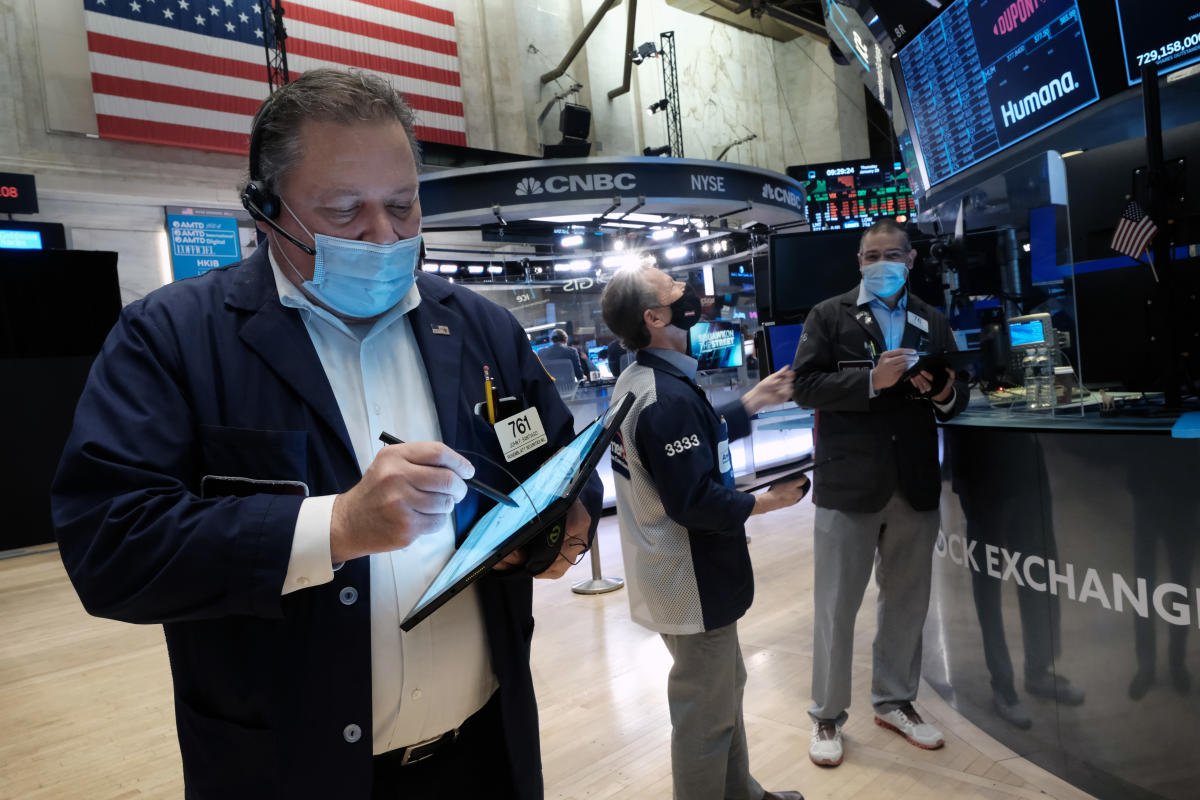 Stocks clawed back losses on Monday as investors looked ahead to a busy week of corporate earnings results, economic data and a Federal Reserve monetary policy-setting meeting after an already volatile stretch of trading.

The Nasdaq Composite ended in slightly positive territory after dropping 4.9% at session lows. And earlier, the S&P 500 was off by more than 10% from its record closing high from Jan. 3 before recouping declines. The Dow recovered losses of more than 1,100 points to end nearly 100 points higher.

The CBOE volatility index, or VIX, jumped to as high as about 37.95, reaching its highest level since November 2020.

Prices for major cryptocurrencies tracked the decline in equities. Bitcoin fell to about $33,000 Monday morning, sinking by more than 50% from its early November high. And ethereum was down more than 10% to hover just over $2,000 as of Monday morning in New York.

Expectations for tighter financial conditions out of the Federal Reserve this year have served as one major factor weighing on equity prices, especially for highly valued stocks that had benefited from the easy financial conditions and high liquidity environment the Fed had contributed to since 2020.

This week’s Fed meeting, with a new monetary policy statement and press conference from Federal Reserve Chair Jerome Powell on Wednesday, is expected to produce virtually no immediate changes to policy. However, as the Fed looks to rein in inflation that has ballooned by the most in four decades during the pandemic-era recovery, this meeting will likely set the stage for the Fed to indicate it is nearing the start of interest rate hikes and has been further contemplating rolling off assets from its nearly $9 trillion balance sheet.

And the Fed is unlikely to be deterred from moving in this more hawkish direction even in the wake of recent volatility across markets, some strategists suggested.

“Until we get a further selloff in risk assets, the Fed will simply not be convinced that raising interest rates and reducing the size of its balance sheet in 2022 will more likely cause a recession rather than a soft landing,” Nicholas Colas, co-founder of DataTrek Research, wrote in a note on Monday.

“Either outcome would dampen inflation, of course, which is why 10-year Treasury yields have stopped climbing,” he added. “But only a soft landing would allow public companies to continue to post strong earnings. The risk of a hard landing is why U.S. large caps are under so much stress.”

A number of large-cap corporations are also set to report earnings results throughout this week, offering another catalyst to markets. The packed slate of earnings results on deck includes Apple (AAPL), Microsoft (MSFT), 3M (MMM), McDonald’s (MCD) and Boeing (BA), among many others.

As of the start of the week, only about 13% of S&P 500 companies had reported quarterly results, according to Goldman Sachs. And so far, one trend that has begun to emerge has been relatively weak commentary about the outlook for this year.

“Investors are very interested in forward-looking guidance from managements, and recent information on that front has been concerning,” Goldman Sachs chief U.S. equity strategist David Kostin wrote in a note. “Bank executives emphasized higher operating costs in the coming year.”

“Following the release of 4Q results, only six companies in the S&P 500 provided formal near-term guidance for 1Q 2022,” he added. “Unfortunately, five of the six firms guided below consensus for next quarter, including three of the stocks that actually beat expectations in 4Q.”

Though the latest stretch of market volatility has hit technology shares especially hard, many tech executives are still feeling upbeat about the longer-term prospects of their companies, according to at least one pundit.

“In the public markets, with all the volatility, that creates day-to-day challenges, although we think that’s going to settle out here as we get through sort of the next wave of Fed decisions and this round of earnings,” Union Square Advisors co-founder and president Ted Smith told Yahoo Finance Live on Monday.

“Most tech executives with whom we speak feel very bullish on the prospects of their companies, feel very good about how they came out of the challenges of the pandemic and the resilience that those companies showed over the course of the last year and a half, two years,” he added. “And so most of them are feeling quite good about the medium and long term prospects for their individual companies but acknowledge that the near term at least stock market challenges, to the extent that those have an impact on their companies, make for a bit of a bumpy ride.”

Growth in both the private services and manufacturing sectors slowed sharply in early January as the Omicron variant exacerbated existing supply chain and labor shortages challenges.

IHS Markit’s preliminary January services purchasing managers index (PMI) slid to 50.9 from December’s 57.6. This marked the lowest level in about 18 months. Readings above the neutral level of 50.0 indicate expansion in a sector. Meanwhile, the institution’s manufacturing PMI also fell in January to a 15-month low, reaching 55.0 compared to December’s 57.7.

“Soaring virus cases have brought the U.S. economy to a near standstill at the start of the year, with businesses disrupted by worsening supply chain delays and staff shortages, with new restrictions to control the spread of Omicron adding to firms’ headwinds,” Chris Williamson, chief business economist at IHS Markit, wrote in a note. “However, output has been affected by Omicron much more than demand, with robust growth of new business inflows hinting that growth will pick up again once restrictions are relaxed.”