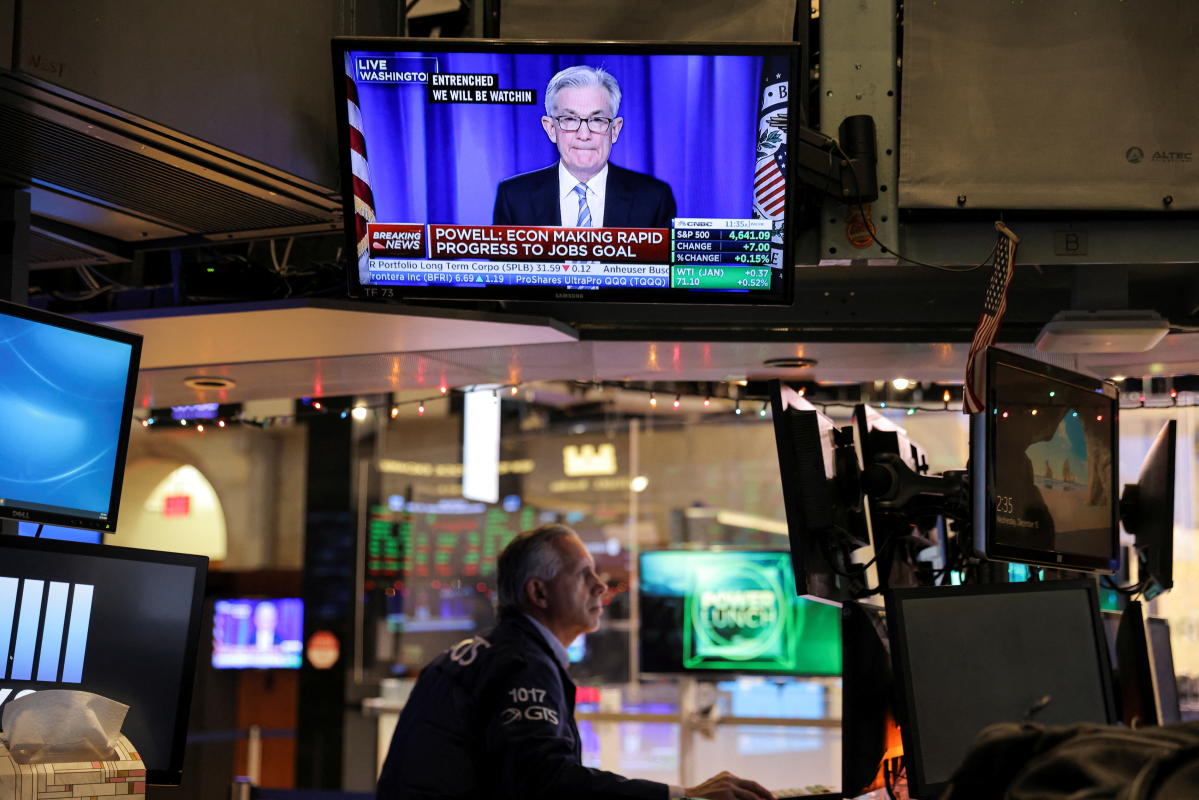 The Nasdaq fell hard on Thursday, dragged down by a sell-off in big-name tech stocks poised to suffer from the Fed’s hawkish shift on potential interest rate hikes in 2022.

All three major U.S. indexes closed in the red as investors mulled the likelihood of rising rates, paring gains from a relief rally staged yesterday after the central bank announced a ramp up of its taper that could end the pandemic-era stimulus program completely by March. The Dow was mostly flat after a choppy trading day, while the S&P edged lower. The Nasdaq shed 2.47%.

Apple () saw its worst day since March, falling more than 4% during intraday trading. The stock closed at $172.26 a piece, down by 3.93%. Shares of Amazon (), Netflix (), and Tesla (TSLA) also declined in a broader sell-off of the largest publicly-traded companies in the world.

First-time unemployment filings totaled 206,000 up from last week’s half-century low but down overall from the highs of their pandemic peak, reflecting labor market tightness brought on by a lingering shortage of workers. Housing starts rose 11.8% on a month-over-month basis in November, and decelerated in early December but still held in expansionary territory

Meanwhile, President Joe Biden signed a bill that averted the U.S. government from defaulting. The bill raised the U.S. debt limit to $31.4 trillion from $2.5 billion.

On Wednesday, Fed officials outlined plans to accelerate the wind down of monthly bond purchases and signaled plans to raise interest rates three times next year in a noticeable adjustment from September projections that reflected a 50-50 split on a rate hike in 2022.

“Supply and demand imbalances related to the pandemic and the reopening of the economy have contributed to elevated levels of inflation,” the FOMC said in its statement. The committee also noted that Omicron and other new variants of COVID-19 remain risks to the economic outlook.

“The market has been pretty sanguine about the whole thing,” Charles Schwab chief fixed income strategist Kathy Jones told Yahoo Finance Live. “The market is not sure that the Fed will actually be able to raise rates as much as they say.”

The Fed’s so-called “dot plot,” a summary of individual members’ outlooks for economic conditions and interest rates, showed the median number of FOMC members expected three rate hikes in 2022, up to four in 2023 and two projected for 2024, reflecting a faster pace for rate increases than anticipated in September’s forecast.

“This is a big shift from the September summary of economic projections, but it’s not necessarily a big shift from what the market was already pricing in ahead of today’s meeting based on some of the more recent commentary we’ve had from officials and the recent data,” Wells Fargo senior economist Sarah House told Yahoo Finance Live.

Here were the main moves at the end of Thursday’s trading session:

Apple (AAPL) neared a session low, falling below 4% to $171.92 per share amid declines across the broader technology sector.

Shares of Adobe (ADBE) were down 10.32%, trading at $565.27 on Thursday—the lowest level in more than two months. The decline comes after the company reported sales forecasts for the fiscal first quarter and full year that missed consensus estimates.

Cisco Systems Inc. (CSCO) traded to its highest level since September 2000, gaining as much as 1.4% during midday trading, according to Bloomberg data. The company traded at $60.35, up +0.71% into to the afternoon session.

The move comes after Morgan Stanley raised its price target for Cisco Systems to $61 from $59, maintaining its Equal weight on the stock. The firm attributed the new price target increased earnings per share estimates for 2023.

Activity in the U.S. services and manufacturing sectors decelerated in early December but still held in expansionary territory, with stubbornly elevated prices looming over economic growth.

IHS Markit’s preliminary December U.S. manufacturing purchasing managers’ index (PMI) registered at 57.8, coming in below November’s 58.3. Consensus economists had been looking for a slight increase in the index to 58.5, according to Bloomberg data. Readings above the neutral level of 50.0 indicate expansion in a sector.

Meanwhile, IHS Markit’s services PMI also ticked down compared to November, coming in at 57.5 compared to the prior month’s 58.0. This also missed expectations for 58.8.

While overall business activity held up last month, many firms cited the burden of increased costs.

“Companies reported broad-based upticks in cost burdens, with a range of key materials noted higher in price, alongside soaring transportation and distribution fees,” the release added. “With the exception of rates seen in October and November, the latest uptick in selling prices was nevertheless the fastest on record (since October 2009).”

Here’s where markets were trading just after the opening bell Thursday morning:

U.S. homebuilding picked up at a faster-than-expected rate in November to rebound after a drop during the prior month.

Housing starts rose 11.8% on a month-over-month basis in November, the Commerce Department said on Thursday. This easily topped estimates for the 3.1% increase expected, based on Bloomberg consensus data. It also brought housing starts up to a seasonally adjusted annualized rate of 1.679 million – an eight-month high. In October, housing starts fell by 3.1%, or by a larger margin than the drop of 0.7% previously reported.

Building permits, which serve as an indicator of future homebuilding, also posted a larger-than-anticipated rise. These increased by 3.6% in November to exceed economists’ expectations for a 0.5% gain.

First-time unemployment filings were up from last week’s half-century low but continued to trend downward overall from the highs of their pandemic peak, reflecting labor market tightness brought on by a lingering shortage of workers.

The Labor Department reported on Thursday that new initial jobless claims totaled 206,000 for the week ending December 11, up slightly from last week and lower than Bloomberg consensus estimates of 220,000. At 184,000, the previous figure for initial filings for unemployment insurance benefits was the lowest since Sept. 1969.

Here were the main moves in markets ahead of Thursday’s trading session:

Here were the main moves in markets as the overnight trading session commenced:

Emily McCormick contributed to this article.